I'm way too tired to be doing this right now, but here's to trying.

So I'm in Bolivia, finally. Paid my $135 gringo tax at the border, got to go through the "special" customs process while the rest of my non-estadounidense bus waited on me, and off I went to Bolivia. The trip from Chile to La Paz was absolutely stunning. Some of the craziest, most beautiful mountains I've seen in my life. Here's a sample: 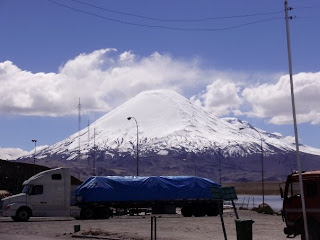 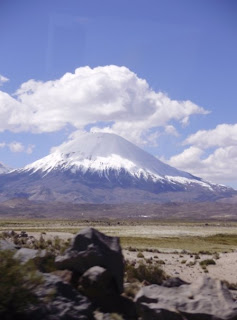 La Paz is a crazy city. I was only there for like 14 hours, but it was enough for the time being. I'll go back and experience it for real sometime. All I got from it was that it's crowded, full of traffic, no roadsigns anywhere, construction everywhere, and cold as junk. 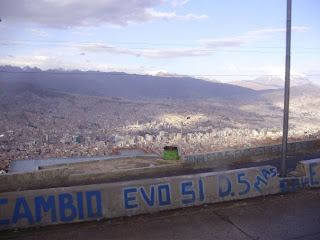 So after my one night there, off I went to Cochabamba. Just like 7 hours, not bad at all. Got there, called the orphanage director, and she sent Dan to pick me up. Dan is the guy who is doing the construction of the extra room with me. He's from Indiana, he's a fellow bassist, fellow homeschooler, and he's only 19. He and I have been getting along great. I was pretty stoked to have someone like him to work with. Having the wrong person to work with in a job as intensive as this one for 3 weeks would be miserable. My host family is awesome too. They're currently out of town on a church retreat, but their kids, parents, and tons of other relatives are staying here in the house for a big family get together this weekend. So I've been a little anti-social so I don't have to have too many awkward introductions.

Construction has been going, well, ok. You'd think from my sunburn and the blisters on my hands that we would have made tons of progress. Not so much. When I first got to the job, we were mixing concrete for the foundation in a wheelbarrow, and we finished that part well enough. Dan had already laid the molds for the foundation so all we had to do was mix and pour. Next was the floor. That was exhausting. We did that on Thursday, and got about halfway done. We also bought all the bricks for the walls. It was a long day.

I got there today (Friday) and was supposed to meet with some construction guy so he could give us tips and pointers and check on our progress. He proceeds to walk right past me when he comes in, walks around to the room, looks close for a couple seconds, and the first words out of his mouth are, "Excuse my language, but this is ****." Well that's not what I wanted to hear. He picks apart everything we'd done and tells us we've got to tear up the floor and start over. I was quite honestly ready to walk out at that point. Dan wasn't there at that point. He refused to talk to me, he just talked to the director of the orphanage and talked about Dan and me in 3rd person and all we needed to do. Not cool.

So, I began to crush the floor apart that we'd worked all afternoon to make the day before. Now, we get to start over on Monday. 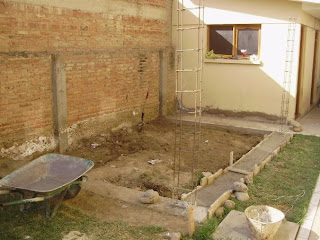 The worksite, after laying the foundation, and pretty much what it looks like right now as well after ripping up the concrete. 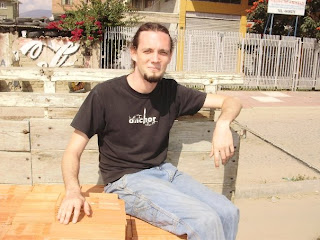 On the back of the truck with our bricks, heading back to the orphanage 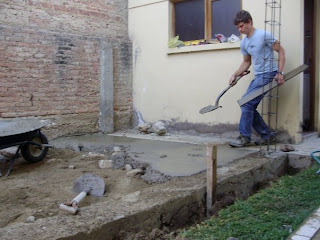 Dan smoothing the cement for the floor

I've gotten to be with the kids more than I expected. The orphanage actually has 3 different houses. The one that Dan and I are working at is the 1st one, and it houses kids between infancy and 5. Lots of crying, pretty constantly. Everyone's got a cough or a fever or something as seems to be the case with young uns. They're precious. Tonight I got to go to house 2 and work. Those kids are older...anywhere between 3 and 12. We had a blast doing dinner, playing tag, even watching Fox and the Hound and Dora the Explorer. It was just me and one other "tia" (aunt - all the workers and volunteers are tios and tias - uncles or aunts), and we had our hands full, especially when trying to put the kids to bed. They can sense lack of authority from a mile away, and they knew immediately when they saw me that I had no control over them whatsoever. Thus, getting them to go to bed, brush their teeth, say their prayers and then shut their mouths was a lengthy task. But I loved it. Hope to get to work with them some more...it's cooler for me with them, because it's easier to make a connection than with nursery aged kids.

So yeah...all is well for the most part here in Cocha. Tomorrow, off to do a hike and test my lung capacity so far. We're not at the La Paz altitude, but we're also not anywhere close to sea level. Sorry this has been uber-boring. I'll try and update next time when it's not 2am and I'm dying for bed.